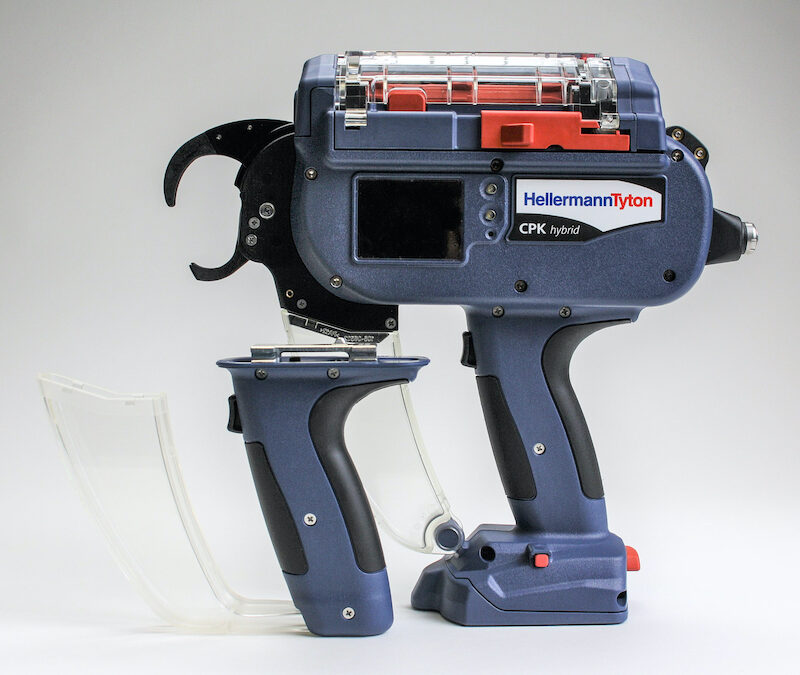 Turns out, 1990 was a defining year for technology. It was the year we launched the Hubble Space Telescope. The internet already existed, but this was the year the web browser was introduced. And Windows 3.0. And Photoshop.

I think we can agree, every one of these momentous achievements changed the world. Okay, our first fully automated cable tie application tool may not have impacted the world with the same, deafening thud.

Yet, in the wire processing world, it was the first tool of its kind. See? Thud!

Without that leap in technology, we wouldn’t be celebrating a new industry first. Our recently released CPK Hybrid is the industry’s first cordless, fully automated cable tie application tool. A full 32 years since its grandfather made a big noise on the industrial scene, the CPK Hybrid delivers a resounding whomp of its own with the introduction of a lithium-ion battery.

As a consumer power tool geek, I couldn’t resist asking our tool developers in Germany, and here in Milwaukee, the story of how we got here.

In 2014, HellermannTyton launched a significant upgrade in the AutoTool lineage. Dubbed the AT2000 CPK, it responded to our customers’ requests for a process-reliable application tool.

The AT in the name, you can probably guess, stands for AutoTool. But the intent behind 2000, according to my sources, remains a mystery. It first appeared on our 1997 AutoTool 2000. Possibly it just sounded cool.

CPK is the most significant part of the tool’s name. A year earlier, in 2013, HellermannTyton launched its EVO® 7 manual cable tie application tool. Our German team liked the short, three-letter combination and decided the new AutoTool should follow suit.

When customers expressed the need for process reliability, many referred to controlling their “Cpk index.” This index is commonly applied to various manufacturing processes and Six Sigma. Appropriately, this new tool was intended to maintain consistent user-specified tension and cutting. So, the product development team found their three letters.

I had to look it up and found Cpk is a “Process Capability Index” measuring a process’s ability to produce something within your customer’s spec. I hope you already learned something new today.

Power, power all around – but no outlet to plug into

In the summer of 2020, HellermannTyton’s team in Spain received a special request from a solar installer. He liked the convenience of automatically bundling cables, but out on a solar farm, getting power to any of the automatic tools on the market would be cumbersome, requiring a large power generator and extra-long extension cords to walk from solar module to solar module. Could we make ours completely portable?

Who doesn’t love a project that solves the needs of the customer?

Spain asked our product folks in Germany, who were intrigued by the challenge and responded that this would require a fair amount of development. New products of this caliber can take years to bring to market.

Eager to help this customer – and excited to tinker with the idea – the team in Spain decided to see how they might solve the challenge locally.

Enter Juan López, a HellermannTyton Spain-based product manager. Juan came up with a smart workaround – running the AT2000 CPK with a user-wearable DC power system.

Juan’s team tested their theory using a 48v e-bike battery connected to a step-up converter to achieve the 220v regional power standard. The tool systems sales team provided technical support. Power was routed to a modified CPK power pack, a component required to run the tool. For convenience, the power system was housed inside a backpack.

Within two months, Spain had a working test unit. The solar customer put it to use, and before long, purchased three tools with the backpack power system.

From backpacks to battery packs

HellermannTyton’s HQ in Germany saw the portable configuration. Engineers were impressed with the ingenuity, but there was greater potential for this new concept.

I find myself equally impressed with the Spanish team’s execution and Germany’s foresight. It comes as no surprise that, when HellermannTyton sister companies found out about the backpack setup, they wanted it. But they’d have to wait.

The German group had begun their own project sparked by Spain’s initiative. Jan Göllner, HellermannTyton Germany’s head of sales and product management for tool systems, “had a vision,” as he puts it.

A 20-year company veteran, Jan is not ordinarily involved at this level. But he sat down with Oliver Dohrmann, tool systems engineer, to explore how to make the CPK a truly cordless tool.

Oliver was all in and wanted to do this right. The conversion would effectively consist of enabling the tool to accept a battery – where else – at the base of the handle.

This would require a new handle design, a battery (which the team didn’t yet have) and the electronics necessary to communicate between the battery and the tool.

I’ve provided an image showing the first handle concept, a later 3D print (I’ll get to that in a moment) and the final product. Note the different batteries. Interesting story there. A battery-powered tool was new ground for us, and we needed to research battery suppliers.

The German team chose to build that first handle prototype incorporating a battery from a well-known supplier. They designed a test handle that would accommodate the battery and provide proof of concept. The test was a success.

The next step was to forge a relationship with a battery supplier able to supply the quantities required for worldwide sales of the tool.

Ironically, the U.S. tool team had a similar experience. Roger Neitzell, our manager – application tool development engineer, had gone through this process for a new power tool we were developing in America. He and Jon Zick, then product innovation manager, researched several options before discovering another German tool and battery maker: Metabo.

Metabo’s Cordless Alliance System (CAS) provides a battery system already used by several other tool brands. In fact, this is the intent of the brand, making a battery system that’s easy to incorporate into a new tool design and universally compatible with so many other industrial tools and their chargers.

I mention that little side story because the German team knew we were simultaneously developing a battery powered tool in the States. They reached out to our Jon Zick and he shared the details about Metabo’s CAS.

A new handle prototype was made using the Metabo specs and necessary electronics. Following rigorous testing, the CPK Hybrid project was completed in October of 2021. The development timeframe was relatively short, and for good reason. We improved an existing tool, and the CAS implementation simplified the battery portion.

Taking things up a few notches

With the addition of a battery, the upgrade to portability would have been enough. Early users commented how the absence of a cord was more freeing. Still, Germany considered ways to further improve this new incarnation of the tool.

Thanks to a new drive motor, the CPK Hybrid applies cable ties faster than its predecessor. Of course, weight is always a concern when developing a tool that will be used for extended periods. We were able to shave off some ounces – and with the added DC electronics and battery, the net weight is about the same as the previous tool.

The placement of the battery received special attention. It’s intentionally aligned with the tool’s center of mass so the CPK can be put down and remain standing.

An automatic processing tool can be used in many workflows – standing, sitting, mounted, etc. One such application incorporates a stationary desk mount for bringing wire harnesses to the tool instead of the other way around. Since the operator’s hands are both used for this, the tool must be triggered by a foot pedal. This scenario requires the CPK’s power pack and an AC power source.

For that reason, the tool can be plugged into a standard AC power outlet for stationary or robotic setups or run on battery for portable applications. Hence, “hybrid.”

The CPK Hybrid went to market in January 2022. At the time, there were no official trade shows in Europe due to COVID, so HQ took to social to get the word out. Here in the U.S., we unveiled it at the 2022 Electrical Wire Processing Technology Expo – right here in Milwaukee. It was a fitting tribute to where this new tool found its power.

Sincere thanks to the extraordinary contributors named in this article as well as my German marketing colleague, James Hill, for his tireless wrangling of people, information and images; and to Joe Roberts, our director of sales – tooling systems, for his insight and weathering the storm with me.

Mike Spanjar is a marketing copywriter at HellermannTyton North America. He writes extensively about the company’s full range of industrial cable management solutions.